Steampunk music is an eclectic music genre. Within the genre, you can hear overtones of Gothic, Industrial, Dark and New Wave, and Synth Pop. Combine those forms of music with Orchestral, Cabaret, Indian, Gypsy, Folk, Ragtime and Klezmer, and you got one helluva genre.

Add in the musicians and stage shows, and you have pure Steampunk in all of its glory. Bands will fashion their equipment to look Victorian or other Steampunk equivalents. Musicians adorn themselves with Steampunk accessories and dress for the period, lending to the excitement of the genre.

Add in the instruments, which often feature cellos, bagpipes, accordions, balalaika, and even hurdy-gurdies to go along with guitars, keyboards, and drums, and you have this writer swooning with delight. 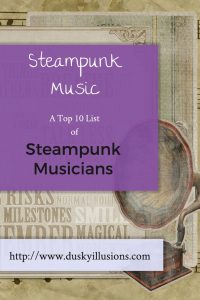 HERE BE PIRATES!!! They do not label themselves as a Steampunk band, but they contain all the elements of one. They dress in pirate wear, have a hurdy-gurdy, cello, and tin whistles.

Storm Seeker lists themselves as Pirate Folk Metal, and in this writer’s opinion, the whole Steampunk Pirate theme is one of the most epic elements of the Steampunk genre as a whole.

If you have followed this blog for some time, you will know that Voltaire is a favorite here at Dusky Illusions. He has a post dedicated to him. Find out more about the artist that is known as Voltaire.

“Three military robots developed in the 1890’s whose skills are no longer needed by the long-dead men who created them. Instead, they have turned their mechanical precision to harmony, which they would like to share with you through these videos.”

The Men That Will Not Be Blamed For Nothing

The band labels themselves as “Crusty punk meets cockney sing-songs meets grindcore in the 1880’s.” The name The Men That Will Not Be Blamed For Nothing is a reference to the chalked graffiti discovered above a section of a blood-stained apron believed  Jack the Ripper discarded as he fled the scene of Catherine Eddowes’ murder.

Another band that has been highlighted here at Dusky Illusions before. Their website is currently down, but you can check them out on Facebook.

A Quartet hailing from London, England that is a multimedia project featuring games, music, and a graphic novel you can find on their website.

Abney Park mixes the elements of industrial dance, world music, and Steampunk-influenced lyrics. The band’s name comes from Abney Park Cemetery in London, UK. Abney Park used to be one of my favorite Goth bands back in the day.

The Cog Is Dead

The members all portray Steampunk time-travelers from the year 1893. As a time traveling band they travel to various points of time spreading their message to save steam power and analog clockwork while playing their marvelous melodies for all to hear and enjoy. Along the way they have discovered several types of marvelous music which has helped to inspire their own.

Do you enjoy the Steampunk Music Genre? Let me know your thoughts in the comments below.