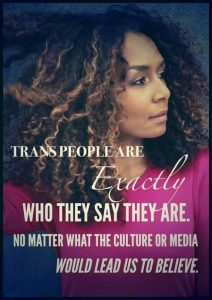 I have been gone for two weeks, from an epic vacation.  There had been times that I had considered not coming back, and upon my return, logging into my favorite chat, I wished I was still away on vacation.

The topic I walked into was “Michelle Obama is transgender”.  I listened to the chat for a while, as they transgender bashed; others included Serena Williams and Caitlyn Jenner.

I couldn’t take it anymore; I had to make a stand on this.  I was angry, maybe I shouldn’t have used the words moron, idiot, or brain-dead to get my point across, but as I sit here reflecting on the conversation, I don’t regret it.  In my mind people who feel they are the “normal” of society acting as if they are the privileged earthly beings irritates me to no end, and the way they were acting, the words I had used fit.

The fact she has been pregnant AT LEAST twice suggests she is a cis-gendered female.  Does she look masculine?  What is looking masculine or feminine really?  Bone structure?  Height?  No distinct hip to waist “hour glass”?  Many Asian women do not have that waist to hip curve going on, but no one questions their femininity.

If she was, it really is NOT our business.  It doesn’t matter what you may think of our current president and his stance on things, his family SHOULD be off limits.  Adults should know that! Right?

The fact that you can Google this sections title and see derogatry articles about Mrs Obama is also sickening.

If someone is transgender, what gives anyone else the right to judge them?

If a male to female transgender knows they are a woman in a man’s body, presents as female and uses the female pronouns, guess what?!  That makes them female!  Laverne Cox, Caitlyn Jenner, and Candis Cayne are just as much WOMEN as Beyonce, Scarlett Johansson, and Tina Fey are.

In turn, the same applies to female to male transgender.  Chaz Bono, for instance, may have been born a beautiful little girl named Chasity, but HE is as much a man as John Wayne and Clark Gable.

I am getting tired of seeing people bash the LGBTQ+ community as a whole.  Everyone has the right to LIVE THEIR LIFE AS THEIR TRUE SELVES!

I am also angered that some of the biggest bashers of the LGBTQ+ community that I have witnessed since Caitlyn Jenner emerged are the professed Pagans.  A true Pagan would be professing acceptance; even to things they do not understand and doing all they can to educate themselves in order to understand the difference.  That is what makes a Pagan different from the “top three” religions.  Paganism is about not judging anyone on their beliefs, sexual orientation, etc.  Gender Identity does fall into that.  Our job as Pagans is to educate ourselves, and accept diversity!

HARM NONE, as the Wiccans say…. Yet I have seen too many causing harm by bashing and saying things like “Caitlyn Jenner is a freak, HE IS A MAN, he was born one!”  Unfortunately that quote is real, and it was said from someone that I respect.  I was shocked to see she would even say it as a professed open minded Pagan.

Do you know what the Transgender community faces each day due to this kind of hate and non-acceptance?

Let me educate you.

This vastly exceeds the 4.6 percent of the overall U.S. population who report a lifetime suicide attempt, and is also higher than the 10-20 percent of lesbian, gay and bisexual adults who report ever attempting suicide. Much remains to be learned about underlying factors and which groups within the diverse population of transgender and gender non-conforming people are more at risk.  – The Williams Institute, American Foundation for Suicide Prevention.

Despite Conservative claims, this does NOT mean the suicide rate is because the transgender community is mentally ill or “confused” and can be fixed. The constant non-acceptance, bashing, and the other points I will address would be enough to have ANYONE think their life was worth nothing. Look at all the deaths that bullying “normal” children has caused.

I think that also has to do with the fact that after coming out, 57 % of families turn their backs on their Transgender family member!

Many states and countries do not offer legal protections in housing, employment, health care, and other areas where individuals experience discrimination based on their gender identity or expression.

55 % of Transgender individuals have lost their jobs for being Transgender, with 54 % forced to “Gender Comply” to keep their jobs.

60 % of the Transgender population has been denied treatment from a doctor/healthcare provider due to their gender identity.

The rate of MURDER VICTIMS amongst the transgender community is the highest in the world.

It is estimated that 1 out of 12 Transgender Individuals face the chance of being  murdered, with the chance rate of 1 of 8 Transgender women of color murdered, according to the Human Rights Campaign.

As of this writing, August, 2015, there have been an estimated 17 Transgender murders in the US alone, 12 of them were Trans Women of color, a confirmed 13.  Shade Schuler’s body was found July 29th, and identified August 12.  August 9th, 2015, Amber Monroe was murdered in Detroit.  There are 4 more months left in this year; but the murders have already caught up with the body count from 2014 of 12 known victims.  In 2013, there were 7.

Shade Shuler is an example of the estimated murders listed.  The police wrongly labeled HER a HE when they found HER body.  It took 2 weeks for them to correctly indentify HER!

Assault and bullying are just as prevalent in the Transgender Community!

70 % of Transgender individuals have been sexually assaulted by LAW ENFORCEMENT!  Yes, you heard me right.. those who are supposed to serve and protect.

69 % of High School Transgender students have been sexually assaulted.

It is estimated that 50 % of Transgender individuals will be raped in their lifetime.

An estimated 63% of Transgender students are bullied in school.

Sobering statistics, don’t you think?  There are more statistics that I have not even begun to list here.  I felt these were enough to get my point across and why the hate needs to stop!

The United States is a melting pot of races and religions.  Transgender people are only a splash of that beautiful diversity that makes up our country.

The murder rate increase from year to year is just overwhelmingly sickening.  It’s time to END THE HATE and allow people to live their life their own way. 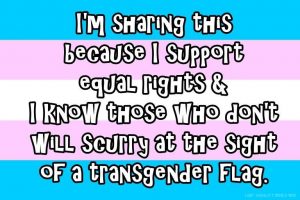