I am leaving movies like The Halloween series, Nightmare on Elm Street, Friday the 13th and Chucky off of this list, not that they don’t scare the pants off of me. Everyone is already aware of their epicness.

Don’t miss out on 15 Kid Friendly Movies for Halloween. 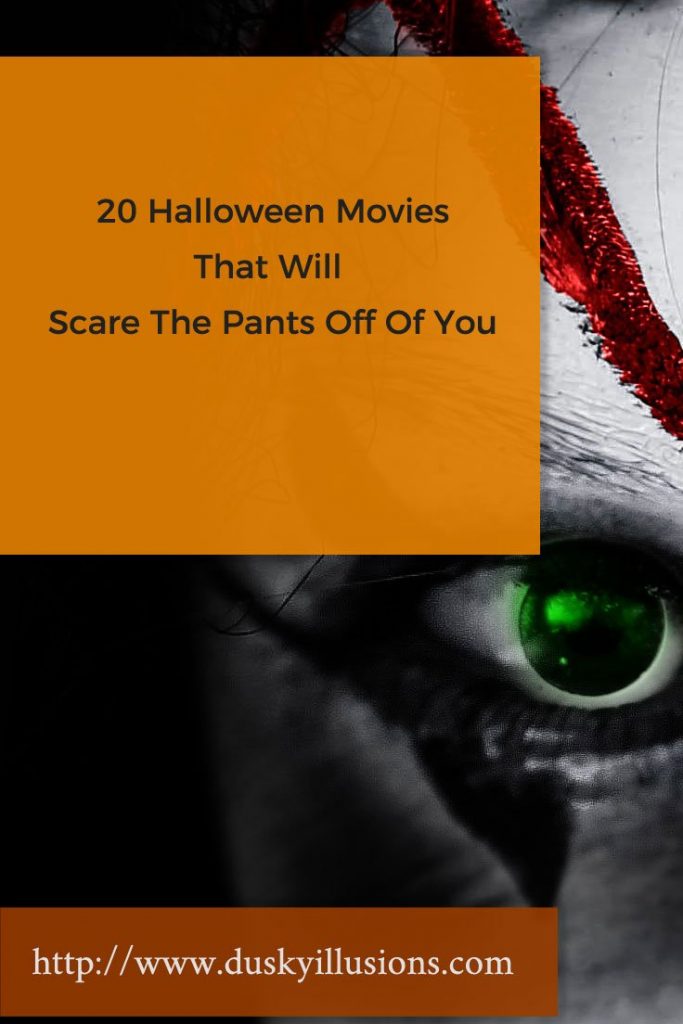 20 Halloween Movies That Will Scare The Pants Off Of You

Terror awaits some friends after they meet a dangerous young woman from a Los Angeles cult.

A deaf writer who retreated into the woods to live a solitary life must fight for her life in silence when a masked killer appears at her window.

A loving father (Andy Powers) becomes a savage killer while wearing a cursed clown costume that won’t come off.

A troubled widow (Essie Davis) discovers that her son is telling the truth about a monster that entered their home through the pages of a children’s book.

In 1970, paranormal investigators and demonologists Lorraine (Vera Farmiga) and Ed (Patrick Wilson) Warren are summoned to the home of Carolyn (Lili Taylor) and Roger (Ron Livingston) Perron. The Perrons and their five daughters have recently moved into a secluded farmhouse, where a supernatural presence has made itself known. Though the manifestations are relatively benign at first, events soon escalate in horrifying fashion, especially after the Warrens discover the house’s macabre history.

When George Lutz (Ryan Reynolds) and his wife, Kathy (Melissa George), find a beautiful new house in the small town of Amityville, N.Y., they think the place is too good to be true. After they move in with their kids, they find out the cheap price tag is thanks to the house’s sordid history: The former tenant murdered his family after supposedly being possessed by the devil. Believing the home is haunted, the couple find a priest (Philip Baker Hall) to help them rid the place of evil spirits.

Found video footage tells the tale of three film students (Heather Donahue, Joshua Leonard, Michael C. Williams) who’ve traveled to a small town to collect documentary footage about the Blair Witch, a legendary local murderer. Over the course of several days, the students interview townspeople and gather clues to support the tale’s veracity. But the project takes a frightening turn when the students lose their way in the woods and begin hearing horrific noises.

Jack Torrance (Jack Nicholson) becomes winter caretaker at the isolated Overlook Hotel in Colorado, hoping to cure his writer’s block. He settles in along with his wife, Wendy (Shelley Duvall), and his son, Danny (Danny Lloyd), who is plagued by psychic premonitions. As Jack’s writing goes nowhere and Danny’s visions become more disturbing, Jack discovers the hotel’s dark secrets and begins to unravel into a homicidal maniac hell-bent on terrorizing his family.

Twin boys who do everything together, from collecting beetles to feeding stray cats, welcome their mother home after her reconstructive surgery. But with her face wrapped in bandages, and her demeanor distant, they grow suspicious of her identity.

One night, while teenagers Blaire, Mitch, Jess, Adam Ken and Val take part in an online group chat session, they are suddenly joined by a user known only as “Billie227.” Thinking it’s just a technical glitch, the friends carry on their conversation… until Blaire begins receiving messages from someone claiming to be Laura Barns, a classmate who killed herself exactly one year prior. As Blaire tries to expose Billie’s identity, her friends are forced to confront their darkest secrets and lies.

Gerald and Jessie Burlingame head to their summer home on a warm weekday in October for a romantic interlude that involves adult games. After being handcuffed to her bedposts, Jessie tires of her husband’s games and things take an unexpectedly tragic turn. She’s left handcuffed, trapped and alone as painful memories from her childhood bedevil her. Her only company is a hungry stray dog, the voices that populate her mind, and possibly someone watching her from the corner of the dark bedroom…

Bert (James DeBello), a college student vacationing with friends in the mountains, mistakenly shoots a local man (Arie Verveen) with a skin infection while hunting in the woods. Panicking, he abandons the scene and leaves the man for dead. When the man stumbles into a reservoir, he infects the water supply, and soon one of Bert’s friends becomes infected. The friends struggle to stop the contagious, flesh-eating disease while on the run from a group of ornery backwoods locals out for revenge.

A high school student discovers a supernatural notebook that has deadly powers. He can kill anyone he wishes simply by inscribing their name within its pages. Intoxicated with his new power, he begins to eliminate those he deems unworthy of life.

Terror awaits a man (Michael Steger), his pregnant wife (Chelsey Crisp) and their four friends as they search for ghosts inside a burned prison.

Plagued by nightmares and visitations from tortured ghosts, Casey Beldon (Odette Yustman) turns to a spiritual adviser named Sendak (Gary Oldman) for help. They discover a family curse that dates back to Nazi Germany: an evil spirit that can take over the body of anyone and is getting stronger with each possession, as it tries to gain full entrance to this world.

A young woman becomes trapped in her wrecked car after a hitchhiker causes an accident.

A newlywed couple have no idea their grim, lascivious landlord has been spying on them since they moved in.

Cloaked, cult-like figures trap a police officer (Aaron Poole), patients and staffers inside a hospital that is a gateway to evil.

Iris (Brittany Snow) and seven other desperate people become trapped in Shepard’s (Jeffrey Combs) mansion. Shepard forces them to play a sadistic game for a large sum of money — but the dilemmas become increasingly deadly.

Have you seen any of these Halloween movies and did they scare the pants off of you? What are some of your favorite scary movies? Let me know in the comments below!