It’s Fall, my favorite time of year. The smell of snow is in the air, and the trees are adorned with red, orange, and gold leaves. It is a tradition in my house to watch family movies in October, movies that give you more of a treat than a trick. Here is a list of 15 kid friendly movies for Halloween that we watch every year as a family. Most of these are airing on Netflix this month.

Looking for scary movies? Check out the 20 Halloween Movies That Will Scare The Pants Off Of You post. 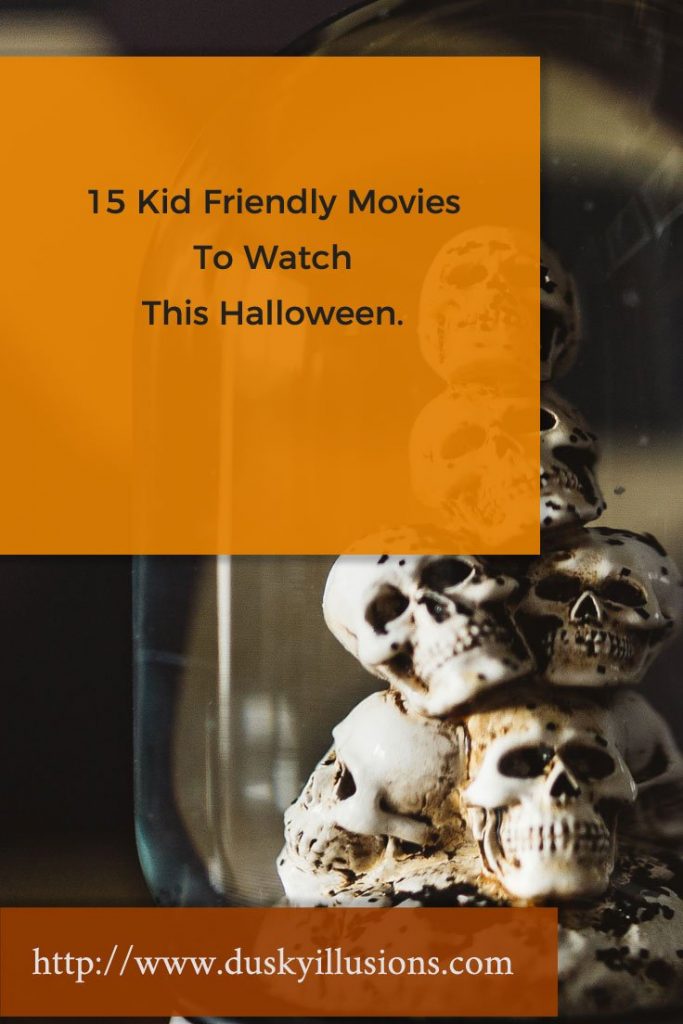 “When Long-Lost Uncle Fester Reappears After 25 Years In The Bermuda Triangle, Gomez And Morticia Plan a Celebration To Wake The Dead. But Wednesday Barely Has Time To Warm Up Her Electric Chair Before Thing Points Out Fester’s Uncommonly “Normal” Behavior. Could This Fester Be a Fake, Part of An Evil Scheme To Raid The Addams Fortune?”

“It’s Halloween and, for Linus, that can only mean one thing: the Great Pumpkin is flying over all the pumpkin patches searching for the most sincere one to reward with treats. Linus will wait in the cold, with Sally and his security blanket to keep him company, hoping the Great Pumpkin will pick his. But where’s Charlie Brown? He’s busy getting ready for a party with the kids and trying to make the perfect ghost costume — unfortunately, our favorite blockhead not only gets rocks in his trick-or-treat bag, but he resembles a pumpkin more than a ghost. At least he hasn’t gotten his costume dirty like Pig Pen, or been pestered by Lucy like Shroeder. Scary! Fear not, Snoopy is in on the fun too, his aviator goggles firmly in place.”

“After moving to Salem, Mass., teenager Max Dennison (Omri Katz) explores an abandoned house with his sister Dani (Thora Birch) and their new friend, Allison (Vinessa Shaw). After dismissing a story Allison tells as superstitious, Max accidentally frees a coven of evil witches (Bette Midler, Sarah Jessica Parker, Kathy Najimy) who used to live in the house. Now, with the help of a magical cat, the kids must steal the witches’ book of spells to stop them from becoming immortal.”

4. The Nightmare Before Christmas

The film follows the misadventures of Jack Skellington, Halloweentown’s beloved pumpkin king, who has become bored with the same annual routine of frightening people in the “real world.” When Jack accidentally stumbles on Christmastown, all bright colors and warm spirits, he gets a new lease on life — he plots to bring Christmas under his control by kidnapping Santa Claus and taking over the role. But Jack soon discovers even the best-laid plans of mice and skeleton men can go seriously awry.

Sally (Sandra Bullock) and Gillian Owens (Nicole Kidman), born into a magical family, have mostly avoided witchcraft themselves. But when Gillian’s vicious boyfriend, Jimmy Angelov (Goran Visnjic), dies unexpectedly, the Owens sisters give themselves a crash course in hard magic. With policeman Gary Hallet (Aidan Quinn) growing suspicious, the girls struggle to resurrect Angelov — and unwittingly inject his corpse with an evil spirit that threatens to end their family line.

Upset about moving from the big city to a small town, young Zach Cooper (Dylan Minnette) finds a silver lining when he meets his beautiful neighbor Hannah (Odeya Rush). The teen is surprised to learn that Hannah’s mysterious father is R.L. Stine (Jack Black), the famous author of the best-selling “Goosebumps” series. When Zach accidentally unleashes the monsters from the fantastic tales, it’s up to Stine, his daughter and Cooper to return the beasts back to the books where they belong.

Victor (Johnny Depp) and Victoria’s (Emily Watson) families have arranged their marriage. Though they like each other, Victor is nervous about the ceremony. While he’s in a forest practicing his lines for the wedding, a tree branch becomes a hand that drags him to the land of the dead. It belongs to Emily, who was murdered after eloping with her love and wants to marry Victor. Victor must get back aboveground before Victoria marries the villainous Barkis Bittern (Richard E. Grant).

No adults believe three youths’ (Mitchel Musso, Spencer Locke, Sam Lerner) assertion that a neighboring residence is a living creature that means them harm. With Halloween approaching, the trio must find a way to destroy the structure before innocent trick-or-treaters meet ghastly ends.

While exploring her new home, a girl named Coraline (Dakota Fanning) discovers a secret door, behind which lies an alternate world that closely mirrors her own but, in many ways, is better. She rejoices in her discovery, until Other Mother (Teri Hatcher) and the rest of her parallel family try to keep her there forever. Coraline must use all her resources and bravery to make it back to her own family and life.

A scientist (Vincent Price) builds an animated human being — the gentle Edward (Johnny Depp). The scientist dies before he can finish assembling Edward, though, leaving the young man with a freakish appearance accentuated by the scissor blades he has instead of hands. Loving suburban saleswoman Peg (Dianne Wiest) discovers Edward and takes him home, where he falls for Peg’s teen daughter (Winona Ryder). However, despite his kindness and artistic talent, Edward’s hands make him an outcast.

Casper (voiced by Malachi Pearson) is a kind young ghost who peacefully haunts a mansion in Maine. When specialist James Harvey (Bill Pullman) arrives to communicate with Casper and his fellow spirits, he brings along his teenage daughter, Kat (Christina Ricci). Casper quickly falls in love with Kat, but their budding relationship is complicated not only by his transparent state, but also by his troublemaking apparition uncles and their mischievous antics.

After the members of a team of scientists (Harold Ramis, Dan Aykroyd, Bill Murray) lose their cushy positions at a university in New York City, they decide to become “ghostbusters” to wage a high-tech battle with the supernatural for money. They stumble upon a gateway to another dimension, a doorway that will release evil upon the city. The Ghostbusters must now save New York from complete destruction.

After Barbara (Geena Davis) and Adam Maitland (Alec Baldwin) die in a car accident, they find themselves stuck haunting their country residence, unable to leave the house. When the unbearable Deetzes (Catherine O’Hara, Jeffrey Jones) and teen daughter Lydia (Winona Ryder) buy the home, the Maitlands attempt to scare them away without success. Their efforts attract Beetlejuice (Michael Keaton), a rambunctious spirit whose “help” quickly becomes dangerous for the Maitlands and innocent Lydia.

While staying at a hotel in England with his grandmother, Helga (Mai Zetterling), young Luke (Jasen Fisher) inadvertently spies on a convention of witches. The Grand High Witch (Anjelica Huston) reveals a plan to turn all children into mice through a magical formula. When they find that Luke has overheard, the witches test the formula on him. Now, with the help of Helga and the hotel manager, Mr. Stringer (Rowan Atkinson), Luke the mouse must fight back against the witches.

When monsters want to get away from it all, they go to Count Dracula’s (Adam Sandler) Hotel Transylvania, a lavish resort where they can be themselves without humans around to bother them. On one special weekend, Dracula invites creatures like the Invisible Man, the Mummy and others to celebrate the 118th birthday of his daughter, Mavis (Selena Gomez). However, an unforeseen complication unfolds when an ordinary human unwittingly crashes the party and falls in love with Mavis.

What kid friendly movies are a tradition for you to watch during Halloween month? Let me know in the comments below.