Can you believe that YouTube has been around for 18 years this coming February? Where did the time go? In that time, I have spent a lot of time on YouTube, and have built my collection of favorite YouTubers over the years. The list I am sharing with you are YouTubers I have been watching for a few years. This list is in no particular order. I love them all equally. 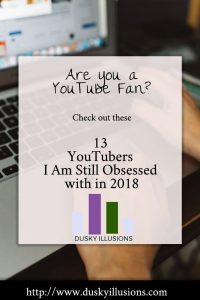 Colleen is an actress, singer, author, and comedian. She is the creator of the Netflix series Haters Back Off, portraying her character Miranda Sings. I am still butt hurt they didn’t pick the series back up for Season 3… Proving that all Youtubers aren’t horrible people, Collen’s  fans raised 60K for her birthday in 2017 for Children’s Cancer.

Ricky Dillon is a singer-songwriter, comedian and member of Our2ndLife. The video below is of his latest single, and if you are a fan, let me know how many Easter Eggs you catch in it. There are many! FUN!

Gabbie is a YouTuber, Viner, author, poet, comedian and singer-songwriter.
“Just a girl doin her best and making a fool of herself while she’s at it.”

“Just a boy being himself and trying to make you laugh. New videos Wednesday and Saturday at 2 pm PST! What I do: Try Not To Laugh Challenges, Daily Vlogs, Family Friendly Videos, Reactions, Funniest Kid Test Answers, Compilation Funny Videos, Cringey Musical.ly, and Skits :)”

Ro, as her fans lovingly call her, is a baker, actress, author, and YouTube personality from where she runs her series Nerdy Nummies. I have been watching her so long that when she got her baking line into stores such as Walmart and Michaels, I sobbed with the pride of a mother. Sorry, not sorry… Her achievements including fundraising for charities are included in the video I linked.

Justine is not only a YouTuber, but she is also a model, host, and actress who offers

Besides being a YouTuber, Joey is an actor, author, producer, and singer. He runs two channels, one that he vlogs on and one features video game content.

All hail the man who can take an hour to tell you what can be summed up in 2 minutes! (Just kidding!) Matpat runs three channels, The Game Theorists, The Film Theorists and GT Live. Besides being a YouTuber, MatPat is also an actor, writer, and producer.

Grace is a YouTuber, actress, and author. If you go to her channel, remember, what has been seen cannot be unseen…

AKA Lilly Singh is also a vlogger, comedian, author, and actress.

Swoozie is an animator who does videos and animations he narrates about his life experiences.

Again, I know about the controversy here. It was dumb; he messed up, he is working on making up for it. It’s not like he click baited a ton of small children with a dead body and then monetized his apology… (Yes, I totally went there…)

There are more YouTubers that do good in this world, doing things you never hear about unless you are a follower. Instead, the media chooses to talk about the crap, like Logan and Jake Paul, and make people like them the examples of what a YouTuber is. Sad, don’t you think? Anyway, I digress. What YouTubers are you still obsessed with in 2018? Have you watched any from my list? What are your opinions on the current controversy surrounding YouTube? Let me know in the comments below.