Songs about food… now there is an idea I can get behind! Food and music to me go hand in hand with each other. Since this blog is primarily about food and music, I thought I would give you the best of both worlds, a post of music about food!

This is going to be a multi genre offering because I just cannot stick to one genre… ever… I am the happy 40ish woman who sits at the red light with Blake Shelton blaring from my CD player, and by the time we hit green, Slipknot takes over.

These songs are not in any specific order of preference. If you enjoy any of these songs, please buy the music! 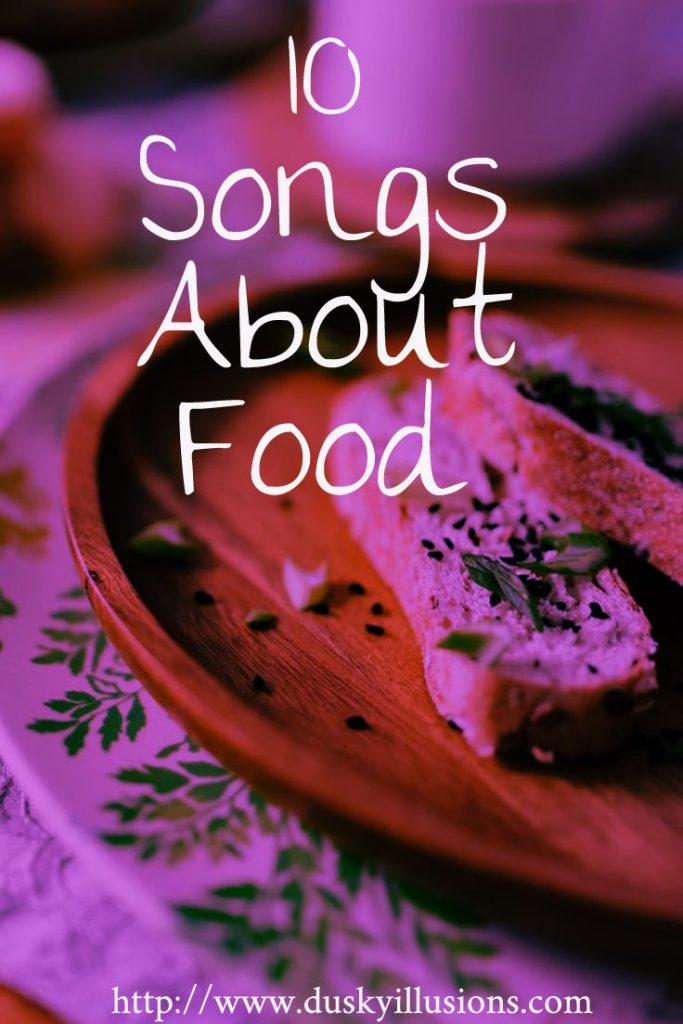 Technically this song isn’t really about burritos, it’s more of a song about being hurt and feeling like absolute shit about the situation you are in. The title of the song was an homage to Ozzy Osbourne.

“Brown sugar, how come you taste so good!” We all know it’s not about the sweet concoction made with sugar and molasses you bake cookies with… It’s still a great classic song regardless.

“I want that red velvet, I want that sugar sweet”. Obviously, this song is about cake. 😛 Ok, not really, but that’s what I tell my 7-year-old. If you go off the trend of songs such as “Cake by the ocean”, it’s about some kind of cake… You get the drift!

“Twenty-year-old turkey in a thirty-year-old tin.” I think that is about right… A song about the love hate relationship of that toss in the oven and go ice block some people call dinner. 😛

When you hear the term American Honey, most people automatically think of the proverbial American smokin’ hot girl next door. This song was inspired by the whiskey of the same name.

It just turned into a story of a kid getting back to old memories and losing yourself when life gets busy and rushed. Just getting back to simpler times. So that’s how we started writing it — some guitar playing, and some really good whiskey! — Shane Stevens

System of a Down – “Chop Suey”

Mmmm Chop Suey, I used to enjoy that before I went strict paleo… but this song, originally entitled “Suicide” is not talking about the delish dish. According to an interview, Daron Malakian stated “The song is about how we are regarded differently depending on how we pass. Everyone deserves to die. Like, if I were now to die from drug abuse, they might say I deserved it because I abused dangerous drugs.”

I like mine with ketchup, mayo, red onion, pickles, and fried zucchini… While visiting the Caribbean, Jimmy has said that they lived on canned food and peanut butter, wishing he had a cheeseburger. I am glad he was dreaming of cheeseburgers, this is one of my all time favorite Buffett songs. Yes, I am a Parrothead and proud!

“Well, I was raised beneath the shade of a Georgia pine / And that’s home, you know / Sweet tea, pecan pie, and homemade wine / Where the peaches grow.” Not to mention one of my favorite foods, FRIED CHICKEN! This song has more meaning than just food, take a listen and decide for yourself.

Umm… was I the only one that forgot Billy Corgan used to have hair? This song has given me goosebumps since the early 90s. It’s not about food, except for the fact that Billy got the name for it when he opened his fridge and saw a jar of mayonnaise. Yes, he also intentionally spelled the title wrong, it is not a typo on my part. This song was also never released as a single, but In 2012 it won a Rolling Stone readers poll for “The Best Smashing Pumpkins Songs” by “a significant margin”. It still is after 23 years, my favorite Smashing Pumpkins song.

Did you enjoy these songs about food? Let me know in the comments below, and please, buy the music if you enjoyed the songs.

Feature Image and Large Pintrest Pinnable image created with a base stock photo from Kaboompics.