End of each year always gets me excited as I think about all the new music that will be coming out again in the year ahead. I am excited about many 2018 album releases; I decided to share with you all of the releases I am the most excited about getting into my hot little hands.

There was a quote I once read that said, “Music is life. That’s why our hearts have beats.” I don’t remember where I read it, or who said it, but the quote is the truth. I have Googled the quote and cannot find a name with any of my searches; only decals for sale, and a kazillion memes with no crediting name attached to the person who created the quote initially.

If you know who said that quote originally please toss me the name in the comments below so I can give proper credit. Thanks. I can relate to that quote. No matter how bad or dark my life was going, I would use album release schedules to pick me back up and keep me going. We all have a band or musician that we cannot wait to get new music from, no matter what is going on in our lives. 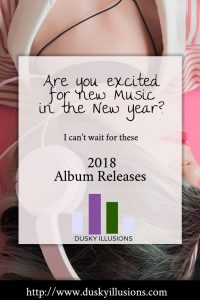 2018 Album Releases I Am Looking Forward To

Black Rebel Motorcycle Club releases their 8th studio album entitled Wrong Creatures. I have already heard the song “Little Thing Gone Wild,” and if that song is a representation of the rest of the album, I can’t wait to have it in my hot little hands.

I have been obsessed with Fall Out Boy since their first album, Take This to Your Grave. I can often be heard scream-singing “This is side one, flip me over, I know I’m not your favorite record…” to this day. (Points if you can name that tune in the comments below.) I am looking forward to their 7th studio album M A N I A

I have been a fan of Saxon since their self-titled album dropped in 1979. Granted, I was almost 10, but my musical tastes have not changed much over the years. I was multi genered even as a child. Thunderbolt is their twenty-second studio album. I am excited.

MYLES KENNEDY IS RELEASING A SOLO ALBUM!!!! *Cries and flails like the fan girl she is* Anyone who knows me knows how I feel about Myles Kennedy. He is one of my all time Favorite Rock Male Vocalists, and I did an Artist Spotlight on him. His solo album is called Year of the Tiger and is available to pre-order.

2018 Album Releases Still to Be Announced

And now for 2018 Album Releases that are still TBA, but I am looking forward to. I will keep you updated as information comes out for each. I am only mentioning bands who have confirmed they are in the studio working on an album as many rumors have been flying around the net that I can not confirm as truth, such as Metal Church.

Blitzkrieg – Title TBA at the time of this writing, and speculated to be released April 2018. The band released a new single and EP entitled Reign Of Fire Dec 8, 2017.

Loretta Lynn – Wouldn’t It Be Great, the release date is TBA.

What albums are you looking forward to picking up in 2018? Leave me your thoughts below.